Czech FM: The Czech Republic supports a peaceful resolution of Nagorno-Karabakh conflict on the basis of all the principles including respect for the sovereignty, territorial integrity of Azerbaijan 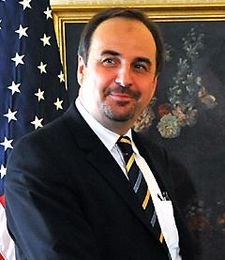 16:33 / 07.05.2010 - How do you estimate the level of bilateral relationships between Azerbaijan and the Czech Republic?

- It is always a pleasure to have an opportunity to confirm that the relations between two countries are at very good level. This is exactly the case of bilateral relations between the Czech Republic and Azerbaijan. Contacts between representatives of our countries are quite intensive. Let me mention just two most visits last year: the visit of our Prime Minister in Baku in February and visit of President Aliyev in Prague in May on the occasion of two important meetings organized during Czech EU Presidency - the Eastern Partnership Summit and the Southern Corridor Summit.
We are strongly committed to further deepen our relations. New Embassy of the Czech Republic has started its work in Baku and I will have the privilege to officially open it during my visit to Azerbaijan. It was not easy to realize this “step” because the financial crisis considerably affected ministry’s budget. But the relations with Azerbaijan are important for us and the existence of the Czech Embassy in Baku proves it clearly.

- In developing of what spheres with Azerbaijan Czech is interested the most?

- I would like to emphasize that the Czech Republic is interested in further development of co-operation in various areas. We have already established very strong link in the field of energy and we would like to deepen our economic co-operation in general. However, we are also strongly interested in development of other spheres such as tourism and cultural co-operation. Azerbaijan is a very old country with impressive history and I am sure that our nations can enrich each other. In this regard I really appreciate the signing of the agreement between our governments on economic, scientific and technical and cultural co-operation.
I appreciate a fruitful co-operation between the Masaryk University in Brno that opened the Azerbaijan and Caspian Studies Centre and the Slavic University in Baku. It is pleasant that many other universities from both countries express their interest in mutual cooperation.
Last but not least, I would like to mention that we are on the path of deepening our mutual parliamentary co-operation. The Committee for International Affairs of the lower chamber of the Czech Parliament has established working group for Czech-Azerbaijanis friendship and co-operation.

- In the framework of Czech presidency in EU a new initiative “Eastern Partnership” was launched in Prague in 2009. Azerbaijan is a member-country of this program. Is the Czech Republic going to further promote this initiative?

- The Czech Republic is, of course, strongly committed to further promote this initiative. We were, together with Poland and Sweden, at the birth of eastern dimension of the European Foreign Policy. And I am happy to point out that the Eastern Partnership was finalized during Czech EU Presidency and officially launched at the summit organized in our capital.

We have always strongly supported the idea of integration of your country to the European structures. Therefore, I am really glad that we have established the instrument that could help Azerbaijan to get closer to the EU in all spheres of co-operation.
Sometimes we can hear complains about slow pace of the initiative. I cannot agree with that. We must understand that Eastern Partnership is a complex initiative and as such it has been growing in gradual rate. We can see that the implementation of the initiative after its launch has been really positive. We have approved the working programmes of all four thematic platforms as well as their core objectives. We have also started preparations of negotiating mandates on the Association Agreement with Southern Caucasus countries. I hope that the negotiations will start during the summer.

- Is the Czech Republic planning to strengthen co-operation with Azerbaijan in energy sphere?

- First of all let me point out that supplies of Azerbaijanis oil cover almost 25% percent of the Czech demand. It makes your country one of the principle energy suppliers to the Czech Republic with broad perspective of further development of our co-operation in the field of energy. Thanks to supplies of oil transited through the pipeline Baku-Tbilisi-Ceyhan, our energy security has substantively improved. We would also like to increase our energy security in the field of natural gas import in the future. Therefore, we fully support the Nabucco project as well as the whole concept of the Southern Corridor. As you know, the Czech Republic spent a lot of effort during Czech EU Presidency on bringing the Southern Corridor closer to reality. We have organized the Southern Corridor Summit, where the European Union and partner countries signed the Declaration expressing full political support to the concept of the energy co-operation in the framework of the Southern Corridor.
I am strongly convinced that the successful co-operation in the energy field will serve as the economic and political catalyst and will have “spillover effect” accelerating the process of overall strengthening relations between the Azerbaijan and the EU.
Here, I would like to recall that the foundations of today’s EU were laid in the form of co-operation in the field of strategic resources - coal and steel. Results of this successful co-operation process are obvious - political union with its own currency.

- Will a consular section function in newly opened Czech Embassy in Azerbaijan, what will simplify the process of obtaining visas for Azerbaijan citizens, who is going to visit the Czech Republic?

- Indeed, the consular agenda is an important part of activity of our new embassy in Baku. I am happy I can confirm that the consular section has already started its regular operation. It means that Azerbaijani citizens willing to visit the Czech Republic do not have to travel abroad anymore, they can ask for visas directly in Baku. I know that people from your country like visiting the Czech Republic, especially Karlovy Vary and Prague, and I hope that number of tourists from Azerbaijan will increase.

- What are the trade relations between the Czech Republic and Azerbaijan? How much is commodity turnover between our countries?

- I am glad that trade relations between our countries are developing. The volume of our trade exchange had been continually increasing to the amount 1.6 billion USD in 2008. Unfortunately, due to the global financial crisis, it decreased to 764 million USD in 2009. Nevertheless, I am deeply convinced that after we get over the crisis, the volume of our trade exchange will return to the increasing path again. At the time being, the majority of the turnover has been made by our import of Azerbaijanis oil. However, I am sure that the Czech companies have a much to offer. Cars produced in the Czech Republic could serve as a good example. Therefore, I have no doubt that the volume of Czech export to your country will increase.

- How do you estimate the activity of Azerbaijani Embassy in the Czech Republic?

- The Ambassador of the Republic of Azerbaijan in the Czech Republic, his Excellency Tahir Taghizadeh, is one of the most active ambassadors accredited in Prague. I think I may say that Ambassador Taghizadeh knows the Czech Republic very well because he has got extended experience related to our country since 1990’s. He knows very well the Czech nature and - what is extremely important - he speaks fluently Czech. That is something we really appreciate. Azerbaijani Embassy in Prague really contributes to further development of our bilateral relations. I am sure that Ambassador Radek Matula and our new Embassy in Baku will play the same role in your country.

- What is position of the Czech Republic on Nagorno-Karabakh conflict?

- We are acquainted with broad historical context of the conflict. We closely follow the development of the peace process mediated by the Co-chairs of the OSCE Minsk group that was established as the international platform striving for peaceful settlement of the conflict. As you know, the former Czechoslovakia was original member of the Minsk Group and we are confident that the group should retain the lead in settling the Nagorno Karabakh conflict. In this respect the Czech Republic supports a peaceful resolution of the conflict on the basis of all the principles established within the Minsk Group, including respect for the sovereignty, territorial integrity and inviolability of the internationally recognized borders of the Republic of Azerbaijan. The Czech Republic stands ready to support all measures that contribute to peaceful resolution of the conflict.
We are strongly convinced that the only way to peaceful solution of the Nagorno Karabakh conflict is through direct negotiations. Therefore, we welcome the last year’s intensification of the meetings of your president with his Armenian counterpart. I hope that the updated Madrid document presented by the Co-chairs of the Minsk Group during the meeting in Sochi at the end of January will serve as the basis for the final compromise settlement.