Academician Budag Budagov: “Local authorities are guilty that some geographic names were not changed in post-Soviet period” 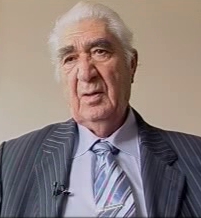 -The geographic names are dynamic issue. The process is divided to several parts. First of all newly-built settlements are named. Second, old and non-historic places are renamed. There were 111 places named only after Lenin, many places named after Kirov and others in the Soviet period. The ancient geographic names were forgotten. The parliamentary commission on geographic names addresses the problem of restoration of ancient titles. We are approaching the newly-formed geographic places from the point of historic view and giving them new geographic names in accordance with the contemporary period. The population is rapidly growing in Azerbaijan and new settlements are established. We are addressing the cases introduced by the local authorities of the regions and making decisions led by the historic factors.

-Armenia changed all geographic names related to Azerbaijan. Was it investigated?

-The geographic names have great historic importance. It depends on the language of the people living there. We together with Giyaseddin Geybullayev drew up an explanatory dictionary of the geographic names in Armenia related to Azerbaijan. There are about 5000 Turkic geographic names and almost nothing Armenian. Others names were distorted or translated. For example, Echmiadzeen, It is “Uchmiadzeen”. “Uch” is “three” in Turkic language. “Muadzeen” is a “prayer house” in Arabic. They acknowledge that they were spread over the world like dust and they don’t know where they came from and where they were settled. Armenians’ “from sea to sea” claims are meaningless and ridiculous. Most of the geographic names in Armenia belong to Azerbaijan and it proves that those places also belong to Azerbaijan.

-By the way, Georgia is also changing the Azerbaijani geographic names.

-As distinct from Armenia, Georgia is conducting this process more progressively. We mentioned the changing of Azerbaijani geographic names in Georgia as well. This is their domestic problem. For example Georgia renamed Arakhli to Arakhlo, but Armenia scythed the Azerbaijani names. They began this process in the Soviet time, but couldn’t complete.

-There are some regions in Azerbaijan still saving Soviet geographic names. Why they are not changed?

-Local authorities are guilty that some places were not renamed. They have to -make their proposals that we can rename them. We have no authority to do it without their proposals.

-Such a book is being prepared, it will be printed in the parliament. There are geographic names which survival requires time.

-Some days ago the parliament renamed Devechi region as Shabran. It was not approved unanimously. What do you think about it?

-Shabran is a historical city of Azerbaijan. Excavations were carried out there and very valuable things were found. Devechi is a geographic name that does not have history. Earlier, it was called Devechibazar. This renaming is of great importance.

-I reiterate that this is in the competence of district executive offices. They must register such districts, write and send to us. Such places should be given modern names. Some executive offices are very passive, they do not write a number of names or send to us. We can not do anything. We do not have right to raise issue. We should protect our geographic names.