Azerbaijani Foreign Minister: “We want to know Armenia’s attitude towards the updated version of the Madrid proposals” 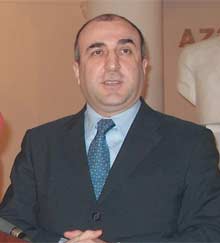 - As you are aware, since 2004 the negotiations on the resolution of the Armenia-Azerbaijan, Nagorno Karabakh conflict mediated by the OSCE Minsk Group have continued within the framework of the Prague process, which envisaged the stage-by-stage approach to conflict resolution. Within the framework of this process during the meeting held in Madrid in November, 2007 foreign ministers of the countries co-chairing the Minsk Group put forward the proposals on the settlement of the conflict reflecting the positions of the conflicting parties. These proposals were accepted as the basis for further negotiations and since then the negotiations have been held around them. In the course of the recent two years the co-chairs paid a number of visits to the region and numerous meetings were held at the level of presidents and foreign ministers of the two countries. A hard work was carried out on different approaches to the proposals. I would like to recall that only in 2009 Presidents of Azerbaijan and Armenia met six times. Several trilateral meetings were held at the initiative of the President of the Russian Federation Mr Dmitry Medvedev. As a result, the co-chairs of the Minsk Group submitted to the conflicting parties a new document which contained updated proposals reflecting the positions of Azerbaijan and Armenia. The Azerbaijani side further announced that it accepted the document in principle after thorough analysis and with few exceptions. We would like to know the reaction of Armenian side with regard to the updated version of the document and with this purpose I will meet with the Minsk Group co-chairs in Paris on March 5. As I said, during the last two years a hard work was conducted with participation of the co-chairs and there is now a document that provides basis for the comprehensive resolution of the conflict. The existing situation demonstrates inadmissibility of the present status quo and requires the soonest solution to the conflict.

The joint statement by the presidents of the countries co-chairing the OSCE Minsk Group made at the G8 Summit in L’Aquila, Italy on July 10, 2009, the joint statement by the foreign ministers of France and Russia and the US Deputy Secretary of State in their capacity as heads of delegations of the OSCE Minsk Group co-chairing countries made at the OSCE Ministerial Council in Athens on December 1, 2009, the statement by the Spanish Foreign Minister Miguel Angel Moratinos during his visit to the region in the capacity of the European Union President, as well as positions expressed by various government officials, international and regional organizations show that the international community is interested and insistent in finding the soonest solution to the conflict.

-Armenian leadership states that any pre-conditions for ratification of Armenian-Turkish protocols and opening the borders are unacceptable. What is your opinion on this issue?

- We explained our position on this issue on numerous occasions. Azerbaijan pursues a policy of non-interference in domestic affairs of other countries and in relations between the countries. But it is well known that Turkey closed its borders with Armenia in a protest against occupation by the latter of the Azerbaijani territories and this occupation is still continued. Thus there is a logical conclusion that if Armenia wants to open its borders with Turkey it should put an end to occupation of the Azerbaijani lands and withdraw its troops from the occupied territories. Turkish officials have also stated that and we believe that to be a sound position. At the same time, the last proposals elaborated by the Minsk Group co-chairs and based on the positions of the conflicted sides also consider the opening of all communications in the region within the settlement of the conflict. Hence the solution to the conflict will lead to the opening of all borders and communications, restoration of infrastructure, integration of the economy and generally to the welfare and prosperity in the region. For this to happen, first and foremost the Armenian troops should be withdrawn from the occupied lands of Azerbaijan and the Azerbaijani internally displaced persons should return to their homelands.