President of PA OSCE: It takes courage and political will to take the final step to solve Nagorno-Karabakh conflict 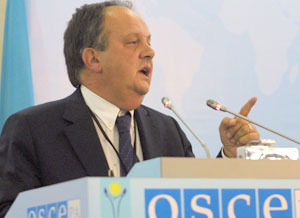 13:14 / 04.03.2010 -It is your first official visit to the region as President of the OSCE Parliamentary Assembly to the South Caucasus. What questions are you planning to discuss in the region, what meetings will be held during your visit?

-Although this is my first visit to the Caucasus as President of the OSCE PA, I have frequently traveled in the region previously. I have been to Azerbaijan several times as an election observer. I have expressed an interest in meeting with the Presidents, representatives of the governments and parliamentarians as well as civil society of all three Caucasian States. In addition, I will meet with the OSCE Offices in Yerevan and Baku. In my view, the OSCE Field Offices do an excellent work, and I would like to support them.

During this visit, I hope to discuss several issues with representatives of Azerbaijan. I am interested in Azerbaijan’s development and the priorities. I look forward to discussing the possibilities for enhancing co-operation with the Parliament of Azerbaijan. And, of course, in learning more about reforms and development.

-What is your prognosis for the peaceful settlement of the Nagorno-Karabakh conflict, whether it is possible this year?

-The Nagorno Karabakh conflict is of course one of the topics that I would like to discuss during the visit. I think it is possible to solve the conflict. A good solution is on the table. It takes courage and political will to take the final step. I believe the current Kazakh Chairmanship of the OSCE and the Minsk Group Co-chairs have a very important role to play in this.

-We know that only OSCE Minsk group is directly involved in negotiation process on Nagorno-Karabakh. But as OSCE Chairperson-in-Office told on PA OSCE Winter meeting "Strengthening co-operation with OSCE parliamentarians is an important component in tackling regional challenges such as protracted conflicts". Is PA OSCE planning to launch any initiatives on a parliamentarian level to contribute the peaceful resolution of the conflict?

-I agree very much with the Chairman-in-Office, Minister Saudabayev, that Members of Parliament have a unique role to play in preparing a solution to conflicts. Of course, Governments are responsible for the negotiations, but parliamentary dialogue helps enhance understanding. As you know, the OSCE PA Special Representative on the Nagorno-Karabakh conflict, Mr. Göran Lennmarker, has been engaged in promoting exactly this type of dialogue for a number of years. He will continue his efforts.

-How do you estimate the work of Azerbaijan parliamentarians in the OSCE PA? Are any discussions or decisions on Azerbaijan expected in the framework of OSCE PA activity this year?

-The Azerbaijani Delegation to our Assembly, under the leadership of Mrs. Bahar Muradova who is the Vice-Speaker of the Milli Mejlis, is very active. They participate in debates and are really good colleagues. Azerbaijan is discussed quite frequently, not least in the framework of the regular reports by Mr. Lennmarker.


-Is the OSCE PA planning to observe the parliamentary elections in Azerbaijan 2010?

I am confident that the Assembly’s leadership will want to send a strong election observation mission to the parliamentary elections in Azerbaijan next Autumn. These elections will be crucial for the future of Azerbaijan. It will be very important to have democratic and free elections. This is something I feel very strongly about and that the OSCE PA keeps promoting.