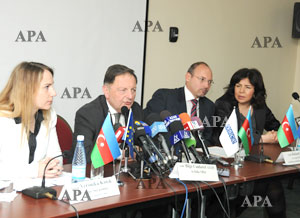 The OSCE Office in Baku, the Council of Europe Office in Azerbaijan and the EU Delegation to Azerbaijan jointly presented their plans for assisting the country to prepare for the 7 November parliamentary elections.

12:40 / 07.04.2010 Head of the Council of Europe Office in Baku Veronika Kotek, head of the EU representation Roland Kobia and head of the OSCE Office in Baku Ali Bilge Cankorel said that the election process was a priority for their organizations and Azerbaijan as a member of the world community. “We confirm that the country should continue to eliminate the problems observed by the international observers in previous elections. All relevant actors need to make efforts and the aim of the project is to support their efforts”. Cankorel told journalists that the three international organizations will concentrate on following issues: enhancing political dialogue, strengthening the capacities and independence of the electoral administration and other relevant actors; supporting a media environment that will ensure independent, unbiased and plural coverage of the electoral campaigns of all candidates; encouraging the proper implementation of the Law on Freedom of Assembly; and stimulating public interest and participation in the electoral process, including by women and young people.

To make best contribution to the Azerbaijan’s efforts towards free and fair elections, the OSCE, EU and CoE will work together with the government agencies and civil society and to organize seminars and round tables to stimulate the public interest and participation in the parliamentary elections.

Head of the CoE Office in Baku Veronika Kotek said the elections that the country held in recent years made them to say that Azerbaijan achieved significant progress in this field. “We prepared the plan of measures for the upcoming parliamentary elections after the consultations with the Government and civil society of Azerbaijan. The program covers four categories: lawmaking aspect, work with the Central election Commission and other institutions which organize the elections, work with the mass media as a part of democratic society and work with the citizens to create an active electoral atmosphere.

Head of the EU representation Roland Kobia noted that EU is also ready to assist Azerbaijan to organize the parliamentary elections. “The European Union is already carrying out several projects concerning the freedom of mass media, stimulating the civil society to participate in the elections and technical improvement of the election process”.