Araz Azimov: “No issue was totally agreed between Azerbaijan and Armenia” 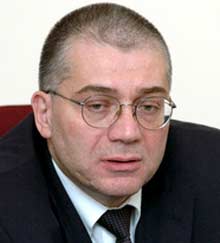 "In the first stage Azerbaijan could offer releasing and returning back five occupied regions, Lachin road and opening Armenian-Turkish border. But only if in the second phase will be returned the remaining areas - the northern part of Lachin and Kelbajar and will be determined returning date, said Deputy Foreign Minister of Azerbaijan Araz Azimov.

09:17 / 15.05.2010 Azimov notified that if the first phase will begin and finish, then have to be agree on the exact time, date releasing remaining lands: “That is have to agreed when and what areas will be released as a continuous”.

While answering the question about “Is there any agreement with Armenia on the returning 5 region?” Azimov said that Armenia in any case can not escape from responsibility, regardless of the desire will liberate the Azerbaijani lands. "However, no issue was totally agreed" he said.
All questions are still at the consultation stage and this process will underway gradually. For example, if in the first stage will be agreed by the formula 5 +1 +1- 5 regions + Lachin road + boundary - then will be discussed issues about the next stage and will be determine the time of returning Azerbaijani refugees to Karabakh. This is a very principled question for the Azerbaijani side, said Azimov. He noted that if Azerbaijani refuges don’t return to Karabagh Azerbaijan generally can not look through the regulating of the conflict. Azerbaijanis absolutely have to return to Karabagh. It is a conceptual issue. Because if we want to determine the future status of Nagorno-Karabakh within Azerbaijan’s territorial integrity, then our refugees have to return to Karabakh and have to take part in this process.

According to Azimov, constructive position of Azerbaijan is that prior to determining the final status of Nagorno-Karabakh, both communities have to reach interim agreements. " Have to ensure freedom, economic cooperation, development of culture and so on for these communities. But Azerbaijani government is ready to start economic activity in Karabakh. But before all should be released the occupied territories, should be opened roads, restored communication, defined temporary legal status of Armenian community for Azerbaijani government be able to cooperate with them. Also have to ensure Azerbaijani community must have equal freedom rights in Karabagh. Azerbaijan’s principles are these, Azimov said.