Ambassador Mahir Aliyev: The agreement on gas transit signed between Ankara and Damascus paved the way for the transportation of Azerbaijani gas to Syria 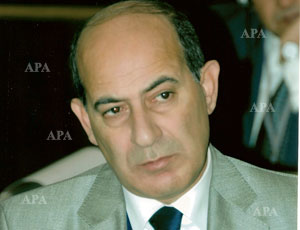 -How do you evaluate the present level of Azerbaijan-Syria relations?

-Azerbaijan has been attaching special importance to the development of the relations and extension of the cooperation with Muslim and Arabic countries since it restored its independence. Strengthening of the relations with the Arab world is one of the priorities of our country’s foreign policy. In this respect, development of the all-round relations with the states having influence like Syria is of great importance. Diplomatic relations between Azerbaijan and Syria were established on March 28, 1992. The two countries are cooperating within the international organizations, particularly UN and OIC.

Syria supports Azerbaijan’s fair position within the framework of the international organizations, actively participates in the adoption of the resolutions and decisions requiring the solution to Nagorno Karabakh conflict within our country’s territorial integrity. Our country supports peaceful solution to Arab-Israel conflict, execution of the resolutions demanding the end of the occupation of Arabic lands, including Golan Heights of Syria and territories of Lebanon, establishment of peace in the region.
Azerbaijani embassy in Syria was opened in May, 2008. The embassy has established close cooperation with all ministries of the country, various governmental and nongovernmental bodies. In this respect, 2009 may be considered effective period in Azerbaijan-Syria relations. During the reporting year a number of high-level visits took place between the two countries. President of Syria Bashar al-Assad paid an official visit to Azerbaijan on July 8-9, 2009, this visit laid the foundation of a new stage in the history of the bilateral relations. During the bilateral talks the heads of state expressed their satisfaction with the development of the relations. The presidents expressed their hope that the relations between our states will extend and underlined that this visit will give an impetus to the new stage of Azerbaijan-Syria relations. They exchanged views on the bilateral relations, regional and international issues. 19 documents on cooperation in economy, trade, investment, industry, energy, health, culture, tourism, education, agriculture, finance and interior affairs were signed during the visit. Azerbaijan-Syria business forum was held in Baku within the framework of the visit. Azerbaijani President Ilham Aliyev and Syrian President Bashar al-Assad participated in the opening of the forum. 120 representatives of Azerbaijani companies and about 70 Syrian businessmen attended the forum.

After returning from Azerbaijan, Syrian President gave instructions to the Cabinet of Ministers to prepare a package of proposals and executive programs on the development of the cooperation with Azerbaijan. The great majority of the documents signed between the two countries, including “Agreement on exemption of persons having diplomatic, service or special passports from visa requirements” are already effective.

-“Memorandum of Understanding on establishing joint commission on economic, scientific, technical and cultural cooperation” was signed during Syrian President Bashar al-Assad’s visit to Azerbaijan. Has the commission been established? When will its first meeting be held?

-One of the important documents signed during the official visit of Syrian President to Azerbaijan was “Memorandum of Understanding between the Government of Azerbaijan Republic and Government of Syrian Arab Republic on establishing joint commission on economic, scientific, technical and cultural cooperation”. The composition of the joint commission has already been confirmed by the two countries and we are holding consultations with Syria on holding the first meeting of the commission. Azerbaijani co-chair of the commission is Minister of Agriculture Ismat Abbasov and Syrian co-chair is Minister of Petroleum and Mineral Resources Sofian al-Alaw.

-What measures are being taken in connection with Baku-Damascus direct flight?

-The agreement on establishing cooperation in civil aviation was initialed between the two countries in 1995 and AzAL operated flights to Haleb at different times. But at present there is no direct air communication between the two countries. During the President Bashar Al-Asad’s visit to Azerbaijan the heads of states ordered air transport administrations of both countries to carry out relevant measures. Syria proposed to launch AzAL Baku-Damascus direct flights. AzAL carries out the flights, but Syria meets expenditures at the Damascus International Airport.

Azerbaijan civil aviation officials are expected to visit Syria in April 2010. They will discuss new version of the agreement on civil aviation cooperation between the two countries initialed in 1995.

-What studies are the Azerbaijani students learning at the Syrian universities?

-Nearly 150 Azerbaijani students are getting education at the Syrian universities and most of them are learning Arabic language and Shari’ah studies. 40 Syrian students are attending the engineering and medicine schools at the Azerbaijani universities now. Azerbaijan and Syria will implement fellowship programs in oil, geology, exact and humanitarian sciences according to the agreement on cooperation in the education field signed during the Syrian president’s visit to Azerbaijan.

-Is the renovation work at Nasimi tomb in Syria completed?

-On the initiative and order by the President of Azerbaijan Ilham Aliyev, the embassy of Azerbaijan in Syria held intensive talks with the Syrian officials for renovation of the tomb of Azerbaijan’s great poet Imadaddin Nasimi in Aleppo and joint scientific conference dedicated to Nasimi’s life and creative work took place in Aleppo on November 11-12, 2008. Nasimi tomb is located at the Nasimi Street at the bottom of Aleppo Fortress. Nasimi’s descendant Mohammad Mamduh Nasimi and his children have key to the tomb’s door. Other members of the family, Nasimi’s servant and wife of Aleppo governor in that time were also buried there. Nasimi complex is located in the ancient part of Aleppo and included in the UNESCO cultural heritage list. Azerbaijan-Syrian joint commission identified that Nasimi’s grave is in emergency condition. Now Syria is completing current renovation work at the complex.
The Second International Nasimi Conference was held in Baku on December 14-16, 2009. Syrian scientists, researchers, officials and religious figures also attended the conference. The Azerbaijani and Syrian ministries of culture are negotiating to hold Days of Syrian Culture in Azerbaijan in July 2010.

-What about the prospects of energy cooperation between the two countries?

- There are large opportunities for Azerbaijan and Syria to establish energy cooperation. The friendly countries see Azerbaijan as a reliable partner. From this standpoint, they appealed to Azerbaijan in 2007 with the intention of buying 1 milliard cubic metres natural gas once a year from our country and they hope, in the near future, after the combining of Syria-Turkey gas network this issue would find its solution. This issue has been discussed in Baku at the meeting of Azerbaijani and Syria presidents and consequently, preliminary agreement on the transference of 1 milliard cubic metres Azerbaijani natural gas once a year to Syria had been decided. During the Turkey-Syria High-Level Strategic Cooperation Council held in Damascus, a signed agreement between the two countries on gas transit serve appropriate background for the transference Azerbaijani gas to Syria. Taking into consideration the exploitation of 160-km Turkey-Syria gas network by the end of 2010 and precipitation of the construction of that pipe in the part of border between Halab and Turkey, he said Syria would be ready for importing Azerbaijani gas from the middle 2011.

Connected with abovementioned, there was an agreement on holding ministerial meeting between the two countries for discussion the transference issue of Azerbaijani gas to Syria and proportionate preparation of agreement which would be signed between the sides and with this aim in view, the delegation headed by Azerbaijani Minister of Industry and Energy Natig Aliyev would visit Damascus at the invitation of Syria side in early March. On the other hand, the transference of Azerbaijani gas to Syria may join our gas network with the Trans-Arab gas network in the near future and it would serve appropriate background for the export of Azerbaijani gas to other countries of Middle East region.

- At the same time, you are Azerbaijani ambassador to Libya. What can you say about political, economic and cultural relations between the two countries? Is a new visit of Libyan officials expected to Azerbaijan?

- Recently, Azerbaijan-Syria relations develop at an accelerated pace. After the accreditation our embassy in Libya, appropriate measures are being taken by our diplomatic mission for bringing the history and reasons of Nagorno Karabakh conflict to Libyan community, introducing our country in Libya. On the initiative of embassy, constant information is being published in Libyan press about Nagorno Karabakh conflict, Khojaly genocide, January 20 tragedy. While presenting credential to Mr. Michel Suleiman, the head of Libya applauded the accreditation of Azerbaijani embassy in Libya, expressed his sureness about stimulation of this constructive step of brotherly country in the development of existent political relations between the two countries and that Libya give big importance in comprehensive relations with Azerbaijan and noted that his country would take an adequate step. Libya is supporter of peaceful solution of Nagorno Karabakh conflict in the framework of Azerbaijani territorial integrity.

Noting big potential for establishment of comprehensive relations between the two countries, the president of Libya spoke about the importance of development of cooperation with Azerbaijan in all spheres. Mutual visits are very important in terms of further development of ties between the two countries. Former Prime Minister of Libya Fuad Sinyoran’s visit to Azerbaijan was expected in spring, 2009. But that visit didn’t happen because of the political crisis during parliamentary elections and after it in this country. Embassy takes appropriate measures in the direction of incumbent chief of Libyan National Unity government Saad Al-Hariri’s visit to Azerbaijan. For this purpose, I’ll visit Libya in the near future and meet with the government officials. I think that there is a big potential for development of economic, trade, energy, investment, banking, culture and tourism spheres between the two countries. I want to say that some media outlets of our country spread information about the visit of Saad Al-Hariri this spring. The visit of Saad Al-Hariri will be realized after the mutual agreement of the two sides.