President Ilham Aliyev: “Salaries and pensions will be increased in Azerbaijan this year again” 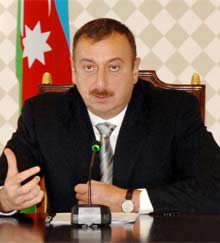 “Our country has all opportunities for future development. Today, Azerbaijan is developing day-by-day. We carry out all tasks successfully”, Ilham Aliyev said while addressing the people in Shirvan.

13:35 / 03.04.2010 The head of state noted that Azerbaijan was pursuing an independent policy in all spheres, as well as in the solution of economic, political and social issues.
“We should try in order to develop our country in future, at all times, to solve all the problems of our country”, he said.
Ilham Aliyev noted that first part of the State Program on Social-Economic Development of the Regions has been completed successfully.
“Now the second program is underway. There are good achievements in the implementation of this program, too. But we must finish all the work in time and carry out all tasks in the program in connection with the completion of the second program. If it is so, main economic, infrastructural and social issues will be solved by 2013. In any case, we have enough political will, strong economic potential, professional personnel to do it. I am sure that existing infrastructure and technical opportunities will help us to achieve this goal,” he said.
The president also noted that there were still many problems to solve.
“Big part of main social and economic problems has been solved. Unemployment has been significantly eliminated in Azerbaijan. Poverty level has dropped from 49 percent to 11 percent - as in developed countries. All this is backed by reforms, considered policy and economic measures,” he said.

Noting that 2009 was a test year for the entire world, Ilham Aliyev said economic and financial crisis had influenced all countries.
“How did the countries stand this test? This is the question. Azerbaijan is a country that has developed rapidly on the world scale, gained economic achievements. Our economy has increased about 10 percent. And it is not a simple indicator. This indicator shows itself in the living standard, flourishing cities, new roads, building institutions. Today, foreign labours come to Azerbaijan to work and we have established State Migration Service to control these processes. Our citizens, who had left for foreign cities and countries, are returning. Stability, social-political order is on the highest level in Azerbaijan”.